The Strode Family Chair of Research 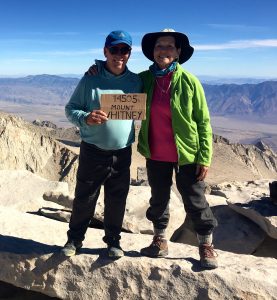 Bob drove Janette (age 68) to an emergency room complaining of a thunderclap headache. It was January 9th, 2017. The ER doctor ordered a CAT-Scan and saw significant bleeding in the brain. He immediately called life flight to transfer Janette to a hospital that could treat the aneurysm. Doctors identified five aneurysms in Janette’s brain. During the next two days Janette spent over 15 hours in the operating room as doctors performed angiograms and brain surgery to deal with the aneurysms. The doctors told Bob “She will get a lot worse before she gets better”, but they were confident she would get better. She spent most of the rest of January in neurological intensive care. She had severe bouts of vasospasms and fluid on the brain, which required many additional procedures and surgeries. She was released to a rehabilitation hospital in February.

Prior to this episode, Janette was fit and an avid hiker. She was determined to get that back. She was able to do short hikes by the summer of 2017, but that was not enough. She wanted to climb Mt. Whitney, at 14,505’ the highest point in the lower 48 states. Bob and Janette summited Mt. Whitney on September 26, 2018. They carried 70 pounds of gear and hiked over 25 miles. Thanks to the doctors, nurses and researchers, Janette has fully recovered.

Bob and Janette support brain aneurysm research, hoping many more families can experience the happy ending they did.