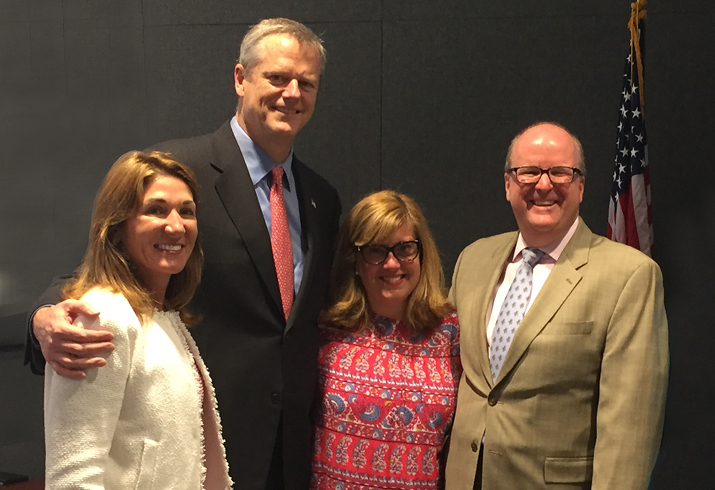 For more than 30 years, Tom Tinlin worked in a high-stress environment, most recently as Administrator for the Highway Division of the Massachusetts Department of Transportation. In that role, Tom, a married father of two who lives in South Boston, was responsible for massive, complex projects like transitioning to all-electronic tolls on the Massachusetts Turnpike and choreographing the rebuilding of a bridge on a major route into Boston with minimal disruption to traffic.

For Tom, 52, the pressures of a demanding job were nothing new. So in April, when he went to his new primary care doctor about the sudden onset of a “horrible, horrible headache” that persisted for three days, and the doctor said it was probably caused by stress, Tom was doubtful.

“I knew something was wrong and it wasn’t stress,” he recalls. But like most patients, he trusted his doctor’s judgment. He was sent on his way with a prescription for pain and sleep medications to take for a week.

On Sunday, April 30, just six days after that first severe headache, Tom was volunteering as an auctioneer at a local fundraising event when, “I felt like I got hit in the head by a baseball bat,” he says. “I also had the sensation of liquid pouring over my head, sounds were muffled, my eyes were out of focus, and I was sweating.”

Tom’s wife, Heather, was with him that day. “I told Heather that I needed get to the hospital right away,” says Tom. Heather rushed her husband to Beth Israel Deaconess Medical Center (BIDMC), where Tom underwent tests revealing that he had suffered a ruptured aneurysm. Treatment (endovascularWithin the blood vessels/vascular system. coilingAn endovascular treatment for aneurysms. The aneurysm is filled with a tiny platinum coil (or coils), causing the blood within it to clot and the aneurysm to be destroyed.) was scheduled for the next morning.

After the procedure, Dr. Thomas informed Tom that he had a second aneurysm, but that it should be carefully followed rather than treated. After 12 days in the hospital, including two days in the Neurosurgical Intensive Care Unit, Tom went home.

Tom’s recovery has been steady and smooth, in part because of his sense of humor, support from family and friends, and realistic expectations. “I gauge progress from week to week, not day to day, and try to challenge myself every day,” he says.

Tom still has some headaches at night, and tires more quickly than in the past, but his healthcare team reassures him that these symptoms will resolve with time. “Dr. Thomas said that in terms of my outcomes, I ‘hit the lottery,’ as so many others with a ruptured aneurysm either die or have lifelong disabilities, so I feel very fortunate.”

Recently, Tom stepped down from his position with the Department of Transportation and plans to find a job that will give him more time to devote to his family, which was hard to come by with his former 24/7 role. “This experience made me re-prioritize my life: now it’s family first, then job,” explains Tom. His colleagues understood his decision but were sorry to see Tom go: Governor Charlie Baker was among those who attended Tom’s farewell party.

As a person who has always volunteered and wants to continue to make a difference, Tom is now helping the Brain Aneurysm Foundation raise awareness about brain aneurysms so that perhaps others will be spared what he and his family endured.

“It frustrates me that my experience was avoidable, had my primary care doctor been more aware of the symptoms of a brain aneurysm. My hope is that we can educate more healthcare professionals and the public about brain aneurysms so that fewer people have to suffer or die.”