What is a brain aneurysm?

A brain aneurysm is a weak, bulging area in an arteryA thick-walled blood vessel carrying blood flow from the heart to any organ of the body, including the brain. in the brain, analogous to a thin balloon or a weak spot on a tire’s inner tube. Because its walls may be weak and thin, an aneurysm is at risk of rupturing. If an aneurysm ruptures, blood spills into the space between the skull and the brain, a serious type of strokeA disability caused by injury to the brain. Most strokes are caused by loss of blood flow to a portion of the brain (called an ischemic stroke or cerebral infarction) or by injury related to bleeding within the brain tissue (an intracerebral hemorrhage) or into the space around the brain (subarachnoid hemorrhage). known as a subarachnoid hemorrhage (SAH)Bleeding into the space around the brain (the subarachnoid space).. 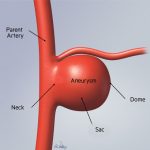 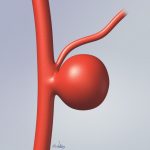 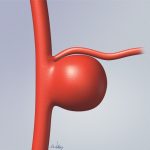 Saccular aneurysms, also called “berry” aneurysms because they look like berries, are the most common type of brain aneurysm. Saccular aneurysms have a “neck” that connects the aneurysm to its main (“parent”) artery and a larger, rounded area called the dome. These aneurysms bulge on only one side of the artery wall. A less common type is a fusiform aneurysmAn irregular shaped widening of a cerebral vessel that does not have a discrete neck or pouch., in which the artery is widened on both sides. Fusiform aneurysms do not have a defined neck.